The Municipality of Kobarid is a municipality in the Upper Soča Valley in western Slovenia, near the Italian border. The seat of the municipality is the town o... 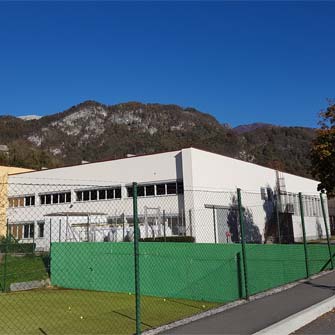 Construction of the municipal climbing center

Because the climbing sport is in the ascendancy and in 2020, sports climb¬
ing is also present for the first time in the Olympic Games, the Kobarid
sports center, owned by the Municipality of Kobarid, is planning to build a climbing center that, besides the climbing wall, to the sports program with¬out a ball. Multipurpose space, it would also be used for various educa-tion, rowing technique, rescue polygon, and the like. In any case, the space could enable the organization of climbing games in Boulder climbing and be attractive for users from the wider area and especially from Italy.

The municipality of Kobarid was founded in 1994. By the number of inhabitants (approximately 4150) it belongs to the medium large municipality.

It is located in the middle part of the upper part of Soča Valley, where the Soča valley and Breginjski kot are connected with the central stream Nadiža. With 193 km2, the area is one of the largest in Slovenia, ranking 28th among Slovenian municipalities. It identifies its position between the Alpine world, part of the territory is located within the Triglav National Park. The surface is quite variable, height difference is large, because the lowest part of the municipality lies at an altitude of 190 m and the highest one is 2,244 m (the top of the hill).

Due to the narrow and mountainous surroundings of the valleys valleys, traffic connections are limited. The main traffic vessel represents a road connection along the Soča River, which through Bovec and the border crossing of Predel leads to Italy. In the opposite direction, the valley is open towards Tolmin, from where it is possible to go to Goriška and Idrija. Another important road connection leads from the settlement Kobarid to the west and connects the villages at the foot of Kobarid Stol to the Breginjski Kot. By the Nadiža river, through the border crossing Robič passes to the Republic of Italy.

Tourist activity in the municipality of Kobarid has been on a noticeable increase in recent years. The tourist offer is based on cultural and historical heritage and sports and recreational activities that require specific natural conditions for the implementation: kayaking, rafting, fishing (Soča), swimming, sunbathing and overpassing activities (Nadiža), hiking, mountaineering, alpinism, paragliding

(Kobariški stol, Matajur, Krn, Ozben and Kuk), skiing (Livek), mini football – futsal, mountain biking, trekking. Due to the great natural quality of the area and the position of the Triglav National Park and its natural values, tourist recreational activities must be coordinated with nature conservation interests. A special emphasis on the complementarity of the tourist offer is also numerous cultural events and festivals, which additionally contribute to the development of tourism and the promotion of agriculture, as local food and local products are mostly sold at these events.

The development is also intensified in the field of cultural activities. Numerous events, which all year round enrich the offer of the place and represent added value in the whole offer.

In Kobarid, special areas from the point of view of landscape and urbanistic characteristics of the area have already been identified and protected by the National Park TNP. As specific areas there are individual areas of natural and cultural values, monuments and the area of Nature 2000. These areas (especially the Soča River and Nadiža) represent the natural potential of development and economy in the Kobarid region. As a special value, Kobarid is important Breginjski kot with its location, landscape characteristic, accessibility and with its own architectural heritage and a special cultural landscape with great potential, such as Drežnica, Krnsko and Livsko pogorje with a mix of natural and creative assets.

The unique beauty of this area is the Soča River, one of the most beautiful in Europe. In this beautiful emerald river there is also a trout trout that attracts fishermen from all over the world. Visitors can also take on the magnificent mountain massifs and high peaks from which they can direct the view all the way to the sea. There are many walking paths with unique panoramic views and well-organized cycling routes for mountain bike rides.

The remains of the Soča Front on the ridges of the surrounding peaks are witnessing events of 100 years ago. The story of the First World War tells the Kobarid Museum, in 1993 it was awarded the Museum Prize of the Council of Europe and a picturesque historical educational trail in the vicinity of Kobarid. The Tonov Grad Castle, a newer archaeological site, witnesses the exceptional importance of these places in the late antiquity.

In addition to all of the above, visitors can also see many other cultural, historical and ethnological sights offered by Kobarid and its surroundings. The rich culinary offer of restaurants and guesthouses united in the “Kobarid gastronomic circle” attracts guests from far and near.

Currently there are no photos for this municipality.

Currently there are no files displayed for this municipality.