The Municipality of Tolmin covers a total area of 382 square kilometres and has a population of 12,028 people (2002) living in 72 settlements. The Social Act...

The Municipality of Tolmin covers a total area of 382 square kilometres and has a population of 12,028 people (2002) living in 72 settlements. The Social Activities Department of Tolmin Municipality is responsible for social and health care, education and sports as well as for public culture and cultural heritage preservation. The local branches of the Union of Cultural Societies of Slovenia (ZKDS) and the Public Fund for Cultural Activities of the Republic of Slovenia (JSKD) facilitate the activities of numerous local cultural organisations with around 500 members. 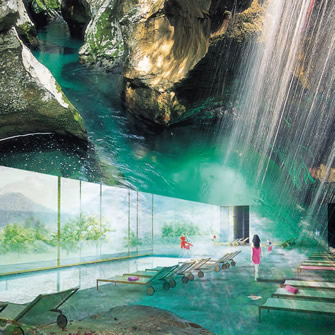 Potential core project could include a 4 star Superior category hotel, linking
together other facilities of the centre with the surrounding environment

The Tolmin municipality lies in the northwestern part of Slovenia and belongs to the Goriška statistical region. It was established on 21 December 1994. It covers 382 km² of area and according to this criterion, is the third among Slovenian municipalities, it also ranks high in terms of kilometers of municipal roads. There are 72 settlements in this area, which are divided into 23 local communities. According to the data of the SI-Stat Statistical Office of the Republic of Slovenia, Tolmin municipality has a population of 11,211 (status as of October 9, 2017), which ranks it between the 45th and 50th place among Slovenian municipalities and indicates the sparsely populated area. The seat of the municipality and also the administrative center of Upper Soča, which unites the municipalities of Tolmin, Kobarid and Bovec, is the Tolmin settlement at an altitude of 200 meters. The Tolmin basin is the junction of four valleys: the Soca valley towards Kobarid, the Soca valley towards Kanal and Nova Gorica, the Idrijca valley and the Baška grapa valley. Part of the municipality lies in the Triglav National Park.

Tolmin municipality in the west partially borders the neighboring Republic of Italy and the municipality of Kobarid, in the north to Bohinj municipality, in the east to the municipalities of Železniki, Cerkno and Idrija, and to the southwest to the Municipality of Kanal ob Soči and the Municipality of Nova Gorica. The region covers a relief zone with the lowest point about 150 meters high and the highest peak of the Tolminski Kuk (2085 m). In the area of Tolmin, the river, glacial and karstic type of relief are connected. Most of the slopes are forested with forests.

Two climatic types prevail – along the valley of the Soča up to Tolmin, submediterranean and in the eastern part of the municipality moderately continental. The largest proportion of about 2,300 mm of precipitation falls in autumn, while the second is at the spring transition to summer; the least precipitation is at the transition from winter to spring and in the middle summer months. Tolmin is rich in water, and rivers are of a torrential character. The main river core is Soča with the left tributaries of Tolminka, Idrijca, Bača and Trebuščica.

In the area of the Tolmin municipality, there are several natural conditions in the agriculture for livestock farming than for agriculture. Mountain pasture has allowed the cultivation of an excellent mountain cheese, according to which this area is known. Industrial plants were built after World War II and there are still major industrial enterprises among the main employers in the municipality, and there are many medium and small plants. In the last years, in the area of the economy, we are witnessing a large increase in tourism, which is the result of a richer and better quality offer and successful promotion. Natural and cultural sights have added numerous experiences to the hosts, including many riders, fishermen, hikers, water sports enthusiasts, cyclists and visitors to summer festivals.

The results of the analysis of ISSO Zlatni kamen in January 2018 by the Municipality of Tolmin ranked the highest among the Slovenian municipalities in terms of the value of the composite index showing the development performance of the municipality.

Currently there are no photos for this municipality.

Currently there are no files displayed for this municipality.